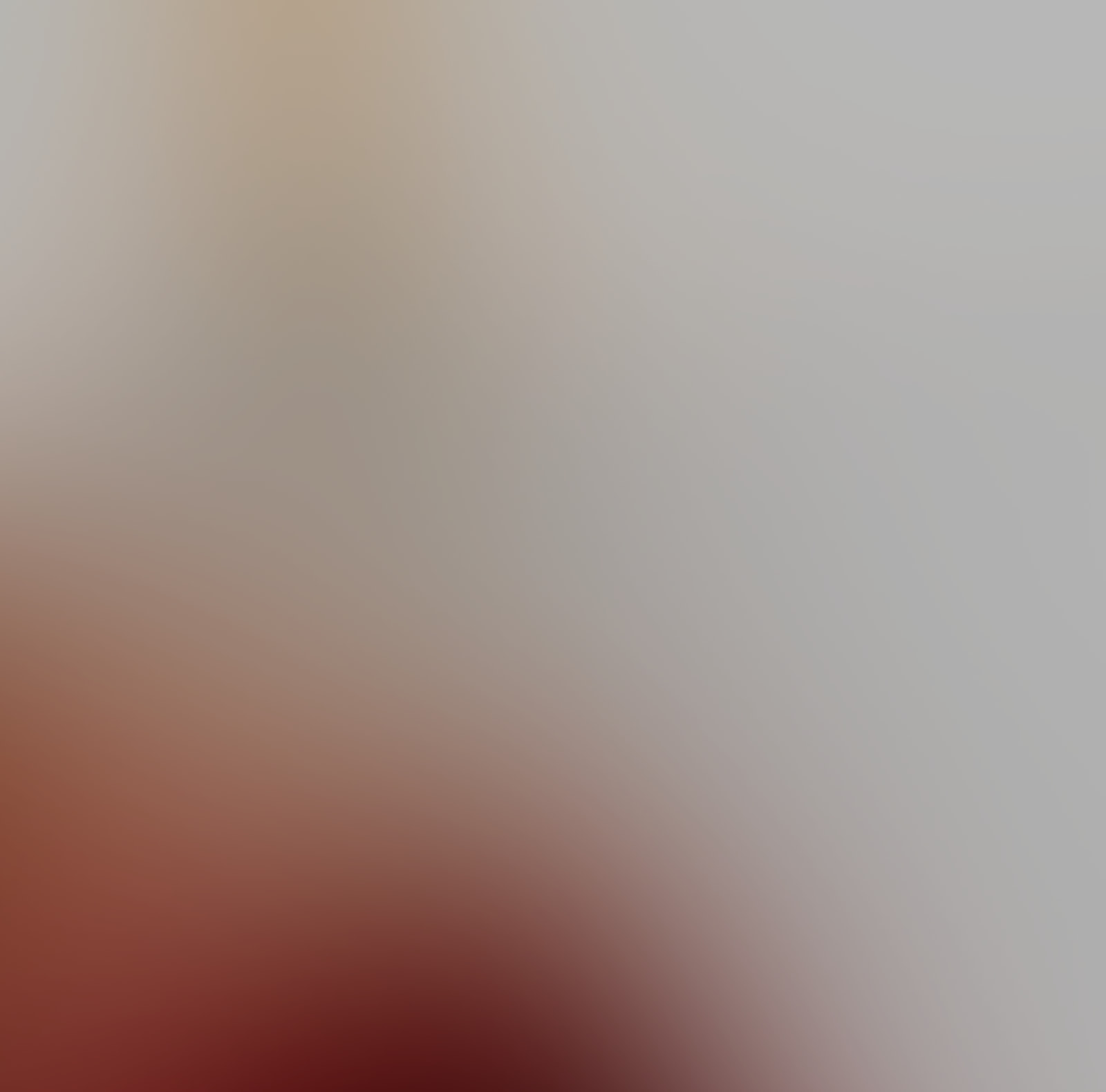 Main
News
«Big time for our people»: who and how creates new medicines in Russia

«Big time for our people»: who and how creates new medicines in Russia

The safety of drug supply is one of those things that Russians took care of during the period of sanctions that hit the country. Experts warned at various levels about the shortage of drugs that may arise in the process of logistics restructuring. However, not everyone needs imported raw materials. For example, the production of Areplivir for the coronavirus in Russia includes all stages: from drug molecule to packaging a finished product before shipping to pharmacies. This drug product is produced at the plant with 60 years history in Saransk.

At the forefront of the pandemic

In pandemic times, the Biokhimik plant took on the responsibility for the development of a considerable share of drugs for COVID-19 in Russia. This enterprise is located in Saransk and its history began back in 1959. In 2020, the plant launched Areplivir, the first domestic drug for the treatment of coronavirus.

«It was a significant event. We were the first to supply such a drug for the health care system,» recalls Dmitry Zemskov, executive director of Biokhimik.

It tooks four months for Biokhimik to develop the drug and launch it on the market; it’s worth noting that the drug was produced from beginning to end at a plant in Russia. Later the «anti-COVID portfolio» of Biokhimik was significantly expanded. «Among the drugs in first revision of COVID-19 treatment guidelines, which included 21 drugs, we supplied 18 to the health care system,» Zemskov says.

Today Biokhimik is one of the ten largest pharmaceutical companies in Russia. In 2021, Forbes placed him on the sixth line of the rating, estimating the company's revenue for 2020 at 9.3 billion rubles.

The plant produces 100 million vials of antibiotics annually. Antibiotics and antiviral drugs form up to 20% of the plant's portfolio. In addition, Biokhimik produces medicines for cancer, neurological and endocrinological diseases.

From raw materials to own medicines

It was not all the time that the plant in Saransk specialized on production of finished drugs. At the dawn of its history, it produced raw materials for drugs that were shipped to pharmaceutical manufacturers in the country and abroad – to Europe, India, China and African countries.

«The system in the Soviet Union was so that major production (biological or chemical) was concentrated in the Russian SFSR, while the production of finished drug products was located in the republics of the USSR,» Zemskov explains. The plant's products were exported to 14 countries at that times.

Despite the success that the site had in the Soviet era, there were some serious problems in the history of Biokhimik plant. The transitional period in the history of the country in the 1990s has weakened the enterprise severely: it almost stopped the production of drug substances. The crisis cut off investments in technology, equipment and personnel, so one can say that during next years the Biokhimik plant rather existed than operated.

This continued until 2015. Then Biokhimik has stepped into a new era: the plant became part of the Promomed Group and turned into a modern production complex of the largest domestic pharmaceutical manufacturer.

The plant was audited, production facilities were modernized, and a modern production culture was introduced. Now it produces drug substances and finished drugs. The company's products are exported to almost all CIS countries.The plant has a representative office in Vietnam. «Now we are starting work with the countries in Latin America. We see a certain export potential there,» Zemskov says. 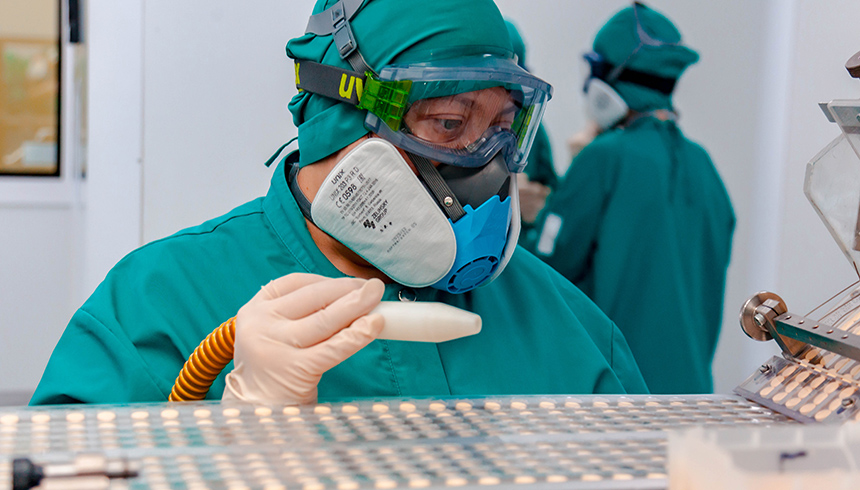 The path of a drug

About 60% of drugs in the Biokhimik’s portfolio are produced in a full production cycle. These drugs pass through all stages at the plant: from drug substance to packaging of finished product. In total, Biokhimik has five workshops. They produce tablets, capsules, ointments, gels, solutions, ampoules and more. About 1.5 thousand people are involved in the new drug development.

At Biokhimik they say that developing a drug from scratch requires many small steps. «It all starts with an idea that is born in the minds of chemists and biologists. Then specialists in the development of medicines begin to work with this idea,» says Zemskov.

At this stage, a chemical formula is created, which is then worked out in the laboratory and transferred to the pilot development stage.

At the second major stage, the creation of the finished dosage form begins. The drug is transferred to the production area, where it goes through the stages of blending, granulation, tableting and packaging (created by package suppliers for Biokhimik).

The pace of producing drugs from scratch has accelerated significantly over the past years. «Over the years, it took from one to three years to progress from idea to implementation. Today, it takes from six months to one and a half years,» Zemskov comments. 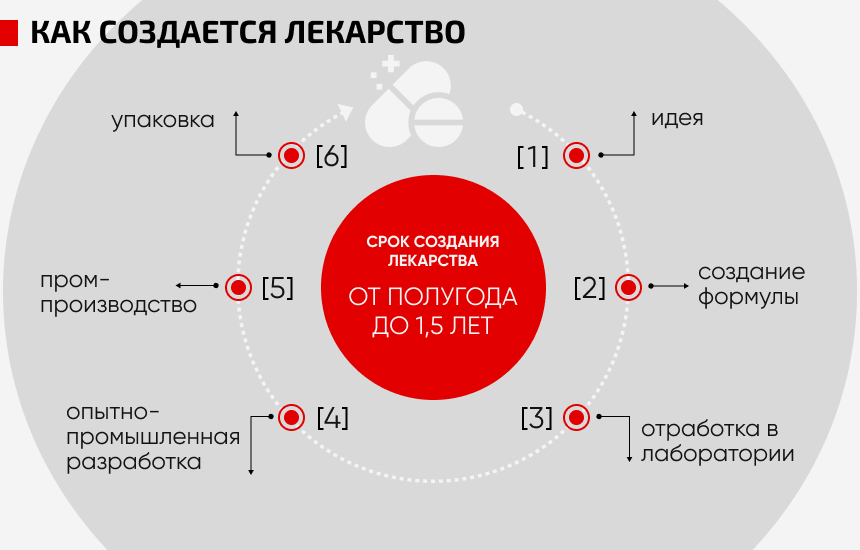 However, the full cycle of drug production in Russia is still more of a rarity than a standard practice. Until recently, it was not economically viable.

The development of drugs (process development + marketing authorization + clinical trials) takes tens or hundreds of millions of rubles. In the case of a full production cycle, this should include the costs of developing a process to produce drug substance, developing separate production facilities for their production, a significant expansion of the analytical base, hiring or training highly qualified personnel, meaning that in this case one could talk about billions of dollars. At the same time, the payback period of such facilities is very long.

«It turned out that the cost of the produced substances would be significantly higher than if they were simply imported from India or China. Now, economic and political factors are significantly changing this paradigm, and we are talking not only about the economic feasibility of production, but also about independence in ensuring the uninterrupted production of medicines,» Zemskov notes. 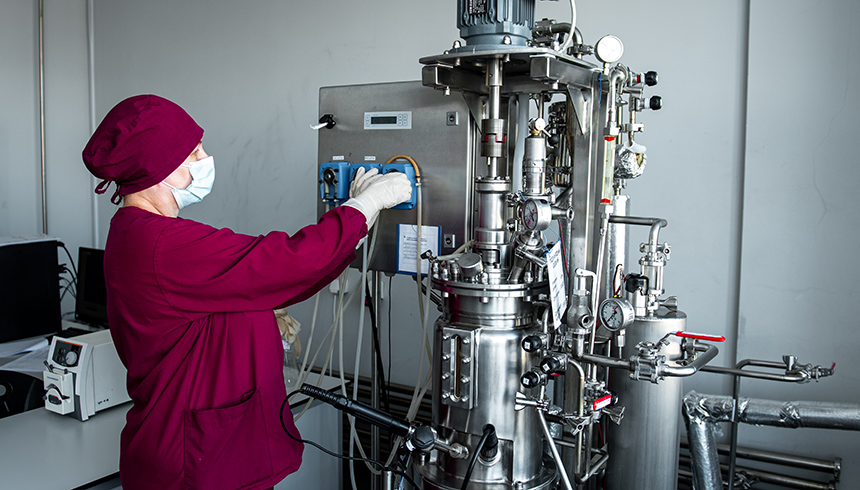 Domestic but not all

Despite the designing of medicines from scratch is already exists in Russia, pharmaceutical companies still cannot operate without imported equipment. According to Zemskov, today Russia does not have established production of process equipment for the pharmaceutical industry.

He comments that now domestic tanks and vessels, pipelines and filtration devices are available, and «this is already a big step forward compared to what we had 5-10 years ago.» However, equipment for the production of finished dosage forms (for example, tablet presses and blister machines) is mainly imported.

In recent years, Russia is shifting from importing equipment from the West to importing it from the East, Zemskov says. For example, many technologies are already coming from China. Domestic equipment also became more available, but this process is not fast. «So we will not be able to ensure sovereignty in creating an equipment manufacturing industry in the next year or two,» he admits.

As for drug sovereignty, Biokhimik considers it possible and extremely important to achieve. «Here it is necessary to develop all related industries, especially small-scale and medium-scale chemistry, which is still insufficient in Russia,» Zemskov comments.

According to him, the national safety of drug supply is impossible without the transition of all plants to full-cycle technology, and sooner or later this transition will happen. «Otherwise, it is simply impossible to work based on the current realities,» Zemskov concludes.